Author’s Note: I wrote this essay to review the methods of utilizing Zebrafish as a model for understanding the mechanisms underlying the development of blood (hematopoietic) stem cells, for my Molecular Genetics Class. I would love for readers to better understand how the use of transgenic zebrafish and morpholinos have advanced our knowledge on the embryonic origin, genetic regulation and migration of HSCs during early embryonic development.

Hematopoietic stem cells, or the immature cells found in the peripheral blood and bone marrow, develop during embryogenesis and are responsible for the constant renewal of blood throughout an organism. Hematopoietic development in the vertebrate embryo arises in consecutive, overlapping waves, described as primitive and definitive waves. These waves are distinguished based on the type of specialized blood cells that are generated and each occurs in distinct anatomical locations (7). In order to visualize and manipulate these embryonic developmental processes, a genetically tractable model must be used. Although many transgenic animals provide adequate models for hematopoiesis and disease study, the zebrafish (Danio rerio) proves to be far superior because of their easily visualized and manipulated embryonic developmental processes (6). Through the use of diagrams and analysis, this discussion will expand upon the mechanisms of the development of hematopoietic stem cells and explain how this knowledge is enriched through the use of transgenic animals and morpholinos, such as the zebrafish.

The zebrafish (Danio rerio) model has proven to be a powerful tool in the study of hematopoiesis and offers clear advantages over other vertebrate models, such as the mouse (Mus musculus). These advantages include the conserved developmental and molecular mechanisms with higher vertebrates, the optical transparency of its embryo and larvae, the genetic and experimental convenience of the fish, its external fertilization allowing for in vivo visualization of embryogenesis, and its sequential waves of hematopoiesis (9). Additionally, zebrafish allow for clear visualization of the phenotypic changes that occur during the transition from the embryonic to adult stages. This is beneficial in understanding and visualizing the hematopoiesis sequential-wave mechanism, as explained below (8). Mouse models on the other hand are embryonic lethal for many hematopoietic transcription factors, meaning the cells die in the embryo, therefore inhibiting that same visualization (12).

An Overview of Hematopoietic Development

The development of blood in all vertebrates involves two waves of hematopoiesis: the primitive wave and the definitive wave (4). Primitive hematopoiesis, involving an erythroid progenitor (or a cell that gives rise to megakaryocytes and erythrocytes), happens during early embryonic development and is responsible for producing erythroid and myeloid cell populations (5). The primitive wave is transitory, and its main purpose is to produce red blood cells to assist tissue oxygenation. These erythroid progenitor cells first appear in blood islands in the extra-embryonic yolk sac, however, they are neither pluripotent nor do they have renewal ability (11). Later in development (varying points in development for different species), definitive hematopoiesis produces hematopoietic stem and progenitor cells (HSPCs), that generate multipotent blood lineages of the adult organism (7). The HSC’s originate in the aorta-gonad-mesonephros (AGM) region of the developing embryo, where they then migrate to the fetal liver and bone marrow [Figure 1.] 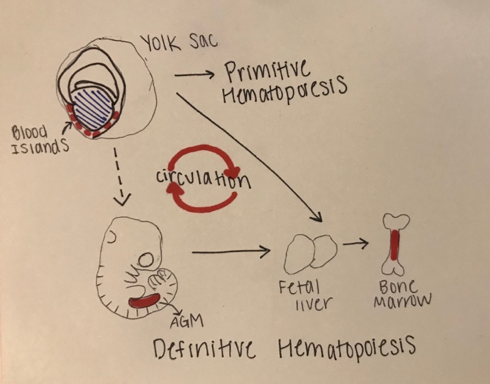 This figure shows the establishment of primitive and definitive hematopoietic stem cells (HSC) during embryonic development. The first HSC’s appear in the blood islands in the extraembryonic yolk sac. The primitive wave is transient, and the successive definitive wave starts intraembryonically in the aorta-gonad-mesonephros (AGM) region. The definitive HSC’s are multipotent and migrate to the fetal liver where they proliferate and seed bone marrow. There is a systematic circulation of the embryonic hematopoiesis.

Hematopoietic Development in the Zebrafish Model:

Like all vertebrates, zebrafish have sequential waves of hematopoiesis. However, hematopoiesis in zebrafish occurs in a distinct manner compared to other vertebrate models, with its primitive HSC’s being generated intra-embryonically, in the ventral mesoderm tissue called the intermediate cell mass (ICM) (2). Throughout this primitive wave, the anterior part of the embryo creates myeloid cells while the posterior creates mostly erythrocytes, both of which circulate throughout the embryo from 24 hours post-fertilization (10). The next step involves hematopoiesis occurring in the aorta-gonad mesonephros (AGM) region, which is followed by the emergence of the HSC’s from the ventral wall of the dorsal aorta. The HSC’s then migrate to the posterior region in the tail called the caudal hematopoietic tissue (CHT). Finally, from 4 days post-fertilization, lymphopoiesis initiates in the thymus and HSC’s move to the kidney marrow (functionally equivalent to bone marrow in mammals) (11) (10)[Figure 2]. Although the anatomical sites of hematopoiesis are different in zebrafish and mammals, the molecular mechanisms and genetic regulation are highly conserved, permitting translation to mammals in many different ways. First, because zebrafish embryos can survive without red blood cells for a long time by passive diffusion, they are ideal for the identification of mutations that would be embryonic lethal in mice (9). These zebrafish mutants have been able to reveal genes that are critical components of human blood diseases and allow for the recognition of toxicity and embryonic lethality at an early stage of drug development. Additionally, the zebrafish model is amenable to forward genetic screens that are infeasible in any other vertebrate model simply due to cost and space requirements. Finally, zebrafish embryos are permeable to water-soluble chemicals, making them ideal for high-throughput screenings of novel bioactive compounds.

A.)    In embryonic zebrafish development, the sequential sites of hematopoiesis. Development first occurs in the intermediate cell mass (ICM), next in the aorta-gonad-mesonephros (AGM), and then in the causal hematopoietic tissue (CHT). Later hematopoietic cells are expressed in the thymus and kidney (Modified from Orkin and Zon, 2008).

B.)    Timeline for the developmental windows for hematopoietic sites in the zebrafish (Modified from Orkin and Zon, 2008).

Transgenic zebrafish and morpholinos are easily manipulated and visualized through microinjection, chemical screening, and mutagenesis, all of which aid in identifying hematopoietic gene mutations and understanding gene regulation and migration in a vertebrate model. Epigenetic analysis of these mutations (through RNA sequencing, CHIP, microarray, and selective inhibition of a gene) have identified critical components to blood development that describe both the functions of these genes within hematopoiesis, and also describe phenotypes associated with defective development (1). Morpholinos target sequences at the transcriptional start site and allow for the selective inhibition of a targeted gene and analysis of the regulatory sequences in this mutant (Martin et al., 2011). Large-scale screening techniques (chemical suppressor screens, etc) of these mutations have identified many small molecules capable of rescuing hematopoietic defects and stopping disease, along with identifying new pathways of regulation (9). Although transgenic organisms have different origin sites and migratory patterns than mammalian hematopoiesis, the genetic regulation of HSC development and lineage specification is conserved, allowing for insights into the pathophysiology of disease.

The zebrafish is an invaluable vertebrate model for studies of hematopoiesis because of its amenability to genetic manipulations and its easily viewed embryonic developmental processes. This organism has become increasingly important in understanding the genetic and epigenetic mechanisms of blood cell development and the information produced is vital for the translation into regenerative medicine applications. Although more research is needed into specifics of HSC differentiation and self-renewal, zebrafish sufficiently allow for newly identified mutations and translocations of human hematopoietic diseases and cancers to be visualized and analyzed, unlike any other model organism. With this analysis, a more complete understanding of the molecular mechanisms of certain hematopoietic diseases can be made, thus aiding in the process of new treatments.