Author’s Note: Last quarter I took Neurobiology (NPB100) with Karen Zito, a professor at UC Davis. I was interested in her research in dendritic spines and its correlation to my personal area of interest in research regarding the language and cognitive deficiencies present in different populations such as individuals with schizophrenia. There seems to be a correlational link between the generation and quantity of dendritic spines and the presence of different neurological disorders. Given the dynamic nature of dendritic spines, current research is studying their exact role and the potential to manipulate these spines in order to impact learning and memory.

I. Role of Dendritic Spines

Dendritic spines are protrusions found on certain types of neurons throughout the brain, such as in the cerebellum and cerebral cortex. They were first identified by Ramon y Cajal, who classified them as “thorns or short spines” located nonuniformly along the dendrite [6].

The entire human cerebral cortex consists of 1014 dendritic spines. A single dendrite can contain several hundred spines [12]. There is an overall greater density of dendritic spines on peripheral dendrites versus proximal dendrites and the cell body [3]. Their main role is to assist in synapse formation on dendrites.

The dense concentration of spines on dendrites is crucial to the fundamental nature of dendrites. At an excitatory synaptic cleft, the release of the neurotransmitter at excitatory receptors on the postsynaptic cell results in an excitatory postsynaptic potential (EPSP), which causes the cell to fire an action potential. An action potential is where a signal is transmitted from one neuron to another neuron. In order for a neuron to propagate an action potential, there must be an accumulation of positive charge at the synapses, reaching a certain threshold (Figure 2). The cell must reach a certain level of depolarization – a difference in charge across the neuron’s membrane making the inside more positive. A single EPSP may not result in enough depolarization to reach this action potential threshold. As a result, the presence of multiple dendritic spines on the dendrite allows for multiple synapses to be formed and multiple EPSPs to be summated. With the summation of various EPSPs on the dendrites of the neurons, the cell can reach the action potential threshold. The greater density of dendritic spines along the postsynaptic cell allows for more synaptic connections to be formed, increasing the chance of an action potential to occur. 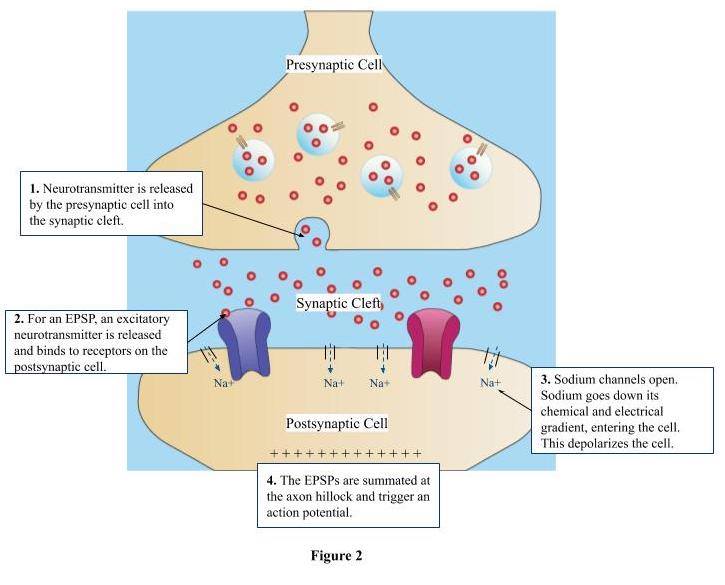 Dendrites initially are formed without spines. As development progresses, the plasma membrane of the dendrite forms protrusions called filopodia. These filopodia then form synapses with axons, and eventually transition from filopodia to dendritic spines [6].

The creation of these dendritic spines is rapid during early development, slowly tapering off as the individual gets older. This process is mostly replaced with the pruning of synapses formed with dendritic spines when the individual is older. Pruning helps improve the signal-to-noise ratio of signals sent within neuronal circuits [3]. The signal-to-noise ratio outlines the ratio of signals sent by neurons and signals actually received by postsynaptic cells. It determines the efficiency of signal transmission. Experimentation has shown that the presence of glutamate and excitatory receptors (such as NMDA and AMPA) can result in the formation of dendritic spines within seconds [3]. The introduction of NMDA and AMPA results in cleavage of intracellular adhesion molecule-5 (ICAM5) from hippocampal neurons. ICAM5 is a “neuronal adhesion molecule that regulates dendritic elongation and spine maturation. [11]” Furthermore, through a combination of fluorescent dye and confocal or two-photon laser scanning microscopy, scientists were able to use imaging technology to witness that spines can undergo minor changes within seconds and more drastic conformational changes, even disappearing over minutes to hours [12].

The spine head’s morphology, a large bulbous head connected to a very thin neck that attaches to the dendrite, assists in its role as a postsynaptic cell. This shape allows one synapse at a dendritic spine to be activated and strengthened without influencing neighboring synapses [12].

Dendritic spine shape is extremely dynamic, allowing one spine to slightly alter its morphology throughout its lifetime [5]. However, dendritic spine morphology seems to take on a predominant form that is determined by the brain region of its location. For instance, presynaptic neurons from the thalamus take on the mushroom shape, whereas the lateral nucleus of the amygdala have thin spines on their dendrites [2]. The type of neuron and brain region the spine originates from seem to be correlated to the observed morphology.

The spine contains a postsynaptic density, which consists of neurotransmitter receptors, ion channels, scaffolding proteins, and signaling molecules [12]. In addition to this, the spine has smooth endoplasmic reticulum, which forms stacks called spine apparatus. It further has polyribosomes, hypothesized to be the site of local protein synthesis in these spines, and an actin-based cytoskeleton for structure [12]. The actin-based cytoskeleton makes up for the lack of microtubules and intermediate filaments, which play a crucial role in the structure and transport of most of our animal cells. Furthermore, these spines are capable of compartmentalizing calcium, the ion used at neural synapses that signal the presynaptic cell to release its neurotransmitter into the synaptic cleft [12]. Calcium plays a crucial role in second messenger cascades, influencing neural plasticity [6]. It also plays a role in actin polymerization, which allows for the motile nature of spine morphology [6].

There are many various shapes for dendritic spines. The common types are ‘stubby’ (short and thick spines with no neck), ‘thin’ (small head and thin neck), ‘mushroom’ (large head with a constricted neck), and ‘branched’ (two heads branching from the same neck) [12].

Memory is associated with the strengthening and weakening of connections due to LTP and LTD, respectively. The alteration of these spines through LTP and LTD is called activity-dependent plasticity [6]. The main morphological shapes associated with memory are the mushroom spine, a large head with a constricted neck, and the stubby spine, a short and thick spine with no neck [6]. Both of these spines are relatively large, resulting in more stable and enduring connections. These bigger and heavier spines associated with learning are a result of LTP. By contrast, transient spines (live four days or shorter) are usually smaller and more immature in morphology and function, resulting in more temporary and less stable connections.

LTP and LTD play a crucial role in modifying dendritic spine morphology. Neuropsychiatric disorders can alter these mechanisms resulting in abnormal density and size of these spines.

I. What is Schizophrenia?

Schizophrenia is a mental disorder that results in disordered thinking and behaviors, hallucinations, and delusions [9]. The exact mechanics of schizophrenia are still being studied as researchers are trying to determine the underlying biological reasons behind this disorder and a way to help these individuals. Current treatment is focused on reducing and in some cases treating symptoms of this disorder, but more research and understanding is required to fully treat this mental disorder.

A common thread among most schizophrenia patients is an impairment of pyramidal neuron (prominent cell form found in the cerebral cortex) dendritic morphology, occurring in various regions of the cerebral cortex [7]. Observed in postmortem brain tissue studies, there seems to be a reduced density of dendritic spines in the brains of individuals with schizophrenia. These findings are consistent with various regions of the brain that have been studied, such as the frontal and temporal neocortex, the primary visual cortex, and the subiculum within the hippocampal formation [7]. Out of seven studies observing this finding, the median reported decrease in spine density was 23%, with the overall range of these various studies being a decline of 6.5% to 66% [7].

It should be noted that studies were done to see if the decline in spine density was due to the usage of antipsychotic drugs. However animal and human trials showed no significant difference in the dendritic spine density of tested individuals.

However, there are conflicting results. For instance, Thompson et al. conducted a study that seemed to suggest that a decline in spine density resulted in a progressive decline of gray matter, typically observed in schizophrenic individuals. Thompson et al. conducted an in vivo study of this phenomena. The study used MRI scans for twelve schizophrenic individuals and twelve neurotypical individuals, finding a progressive decline in gray matter – starting in the parietal lobe and expanding out to motor, temporal, and prefrontal areas [10]. The study suggests that the main attribution for this is a decline in dendritic spine density with the progression of the disorder. This study coincides with the previously mentioned hypothesis of a decline of spines during adolescence.

It is also possible that there is a combination of both of these factors occurring. Most studies have only been able to observe postmortem brain tissue, creating the confusion of whether there is a decline in spines or if the spines are simply not produced in the first place. The lack of in vivo studies makes it difficult to find a concrete trend within data.

While research is still ongoing, current evidence seems to suggest that dendritic spines are a crucial aspect in learning and memory. Their role in these crucial functions has been reflected by their absence in various neuropsychiatric disorders – such as schizophrenia, certain learning deficits present in some individuals with ASD, and memory deficits present in Alzheimer’s disease. These deficits seem to occur during the early creation of neural networks in the brain at synapses. Further research understanding the development of these spines and the creation of different morphological forms can be crucial in determining how to potentially cure or treat these deficiencies present in neuropsychiatric and learning disorders.