Twin births made up 3.11% of American live births in the year 2020 [1]. There are two types of twin pairs: monozygotic (MZ), or those consisting of identical genomes, and dizygotic (DZ), or those consisting of genomes with 50% similarity (the same as siblings) [2]. The identical nucleotide sequences of MZ twins can be used to monitor chemical changes to gene expression due to environmental factors over time, the study of which is known as epigenetics [3-5].

Such environmental effects on the genome result in a phenomenon known as epigenetic drift, in which the epigenome changes over time. Specifically in MZ twins, older twin pairs tend to display more epigenetic differences than their comparatively younger twin pairs [6, 7]. This may be why twins start to differ in physical characteristics as they age. Currently, the most common epigenetic changes that have been observed are the methylations of cytosines at cytosine-guanine base pairs, as well as the acetylation of histones [3]. In this review, we will consider both modifications separately and will discuss studies investigating both types of genetic modifications.

Acetylation and Methylation of the Genome on a Molecular Level 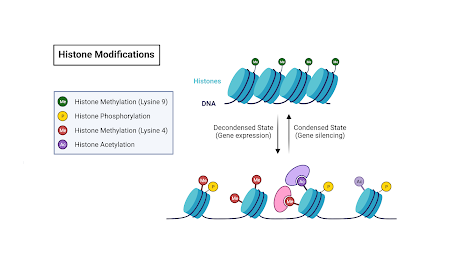 Histone acetylation is one of the most commonly observed methods by which genes are activated in the epigenome. Acetylation changes the structure of the chromatin in the genome, typically by the effects of transcription activators known as histone acetyltransferases (HATs) and histone de-activators known as histone deacetylases (HDACs) [8, 9]. Interactions between HATs and HDACs determine the nature of the epigenome. For example, environmental stimuli may trigger cellular signaling pathways that activate factors which recruit HATs [10, 11]. Additionally, proteins binding to methylated DNA possess a transcription-regulatory domain, which recruit HDACs to the site [12]. Thus, an increase in methylation due to the environment could increase the amount of HDACs present.

Another common method of epigenetic change is through cytosine methylation in CpG sites, or a guanine nucleotide following a cytosine nucleotide in the 5’3’ direction [13]. This methylation is primarily caused by the transfer of a methyl group onto the C5 position of cytosine by DNA methyl transferases (DNMTs), and can be used as an epigenetic clock to determine chronological age [14]. DNA methylation also may have different effects in various regions of the genome—for example, DNA methylation can regulate tissue-specific gene expression, but is also important in X chromosome inactivation [15].

Few longitudinal studies have been conducted to measure epigenetic drift by assessing changes in DNA methylation.  Longitudinal studies, in which the same subjects are followed throughout different stages of their lives, allow for an increased understanding of changes in gene expression over time, as the data is received from the same person [16]. Martino et al. conducted one of these studies, measuring the DNA methylation of CpG sites of buccal epithelial cells, or constantly shed squamous epithelial cells lining the inside of the cheek, of MZ and DZ twins from ages birth to 18 months. The study found that while the DNA methylation of some twins became more dissimilar over time, some twins were actually more similar as they aged. This phenomenon of becoming more similar over time is known as epigenetic convergence, and is thought to be an effect of the tendency of a population to regress to the mean, a phenomenon in which a group displays characteristics closer to the average as opposed to more extreme values [17]. Similarly, it was also found that of the twins who displayed epigenetic convergence, most had higher rates of dissimilarity at birth and were thus moving toward the average DNA methylation. Nevertheless, high rates of all epigenetic change were found after birth in this study, and it was concluded that such changes arose from stochastic and environmental factors, including the maternal environment from which they were born and their exposure to famine [18-20].

Wong et al. conducted a similar study with human twins from ages 5 to 10 years, and found that inter-pair correlation in the DNA methylation of the dopamine receptor 4 gene (DRD4) was similar in both MZ and DZ twins. This finding suggests that these correlations in the DRD4 gene are influenced by factors that impact these twins who live in the same environment, and indicates that DRD4 methylation may not be heritable. They also found significant low correlations between the DNA methylation of the serotonin transporter gene (SLC6A4/SERT) of MZ and DZ twins, indicating that the methylation of SERT is attributable to the unique environmental experiences of each child, and is not heritable. These findings show that the environment has a visible impact on the methylation of the genome, and that this impact begins taking place early in life [21].

Cross-sectional studies have supported the existence of epigenetic drift, and have indicated that accordingly epigenetic differences increase with age [19]. Cross-sectional studies describe studies in which different subjects are studied at varying life stages. These studies are useful for understanding the relationship between exposures or diseases to the epigenome, but cannot be used to track genetic changes in the same subject over time, given that these studies use point measurements with different individuals [16]. Fraga et al. studied 80 Caucasian twins from Spain, and measured the acetylation of global histone H3 and H4 and DNA methylation via total 5-Methylcytosine content. In the case of acetylation in the MZ twin pairs, the youngest pairs were the most epigenetically similar, while the older pairs were much more distinct from one another. This implies that the MZ pairs grew to be more epigenetically distinct over their lifetimes, and supports the existence of epigenetic drift. Similar to what they discovered in regards to acetylation marks, Fraga et al. also found that twin pairs with the most different methylation sequences were either older, had spent more time apart, or had experienced different natural health difficulties. In other words, younger MZ twin pairs were more epigenetically similar in regards to their methylation patterns. These findings indicate strongly that there is a direct correlation between increasing age and the number of epigenetic differences among MZ twin pairs [22].

Epigenetic drift is the phenomenon in which the genome changes over time due to stochastic environmental factors, and is the reason that the genomes of older MZ twins are more different than those of younger MZ twins [3, 4]. MZ twin studies, both longitudinal and cross-sectional, allow for the examination of both time-related and exposure-related changes in the genome, and ultimately help create a better understanding of the dynamic nature of the epigenome.

The cause of such epigenetic change is also yet to be determined, as changes in gene expression continue well after reproductive age, meaning that these epigenetic changes cannot be passed down to the next generation. Interestingly, the changes induced by the environment may also be nonadaptive, further confusing the purpose of epigenetic drift [3]. Further longitudinal studies must be conducted in order to determine these effects, and to ultimately help understand the purpose of epigenetic drift.