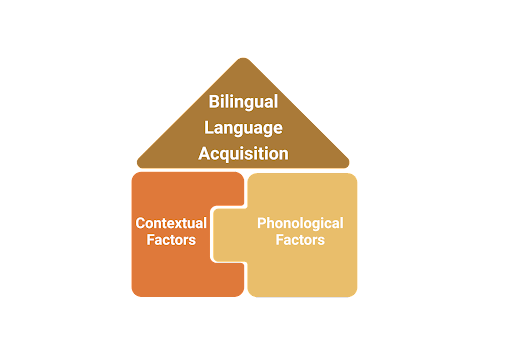 Phonological awareness in bilinguals refers to the capability of recognizing the small sound units in both languages [7], and this awareness not only assists bilinguals to differentiate between two languages but directly affects language-learning process across different scripts [2,9]. Von Holzen et al. investigated the phonological facilitation in monolingual and bilingual language recognition, and found that compared to monolingual toddlers, bilingual children can successfully identify the changed-consonants in both L1, the first/native language and L2, the second language [11]. In the study, authors recruited German-English toddlers (N=31) and German monolingual toddlers (N=23; female:10) from the same city in Germany. They used the Intermodal Preferential Looking Word Recognition task to investigate two experimental conditions: recognition of mispronounced words, and recognition of changed-consonants. During trials, target-distractor word pairs were presented on the screen followed by a fixation point, and a camera was placed above the screen to record children’s looking preference: whether they fixated longer on target word or distractor word. The results showed that both bilingual and monolingual toddlers can successfully recognize the mispronounced words, but only bilingual toddlers showed clear recognition in changed-consonants. One interpretation of this result is that bilingual toddlers’ phonological knowledge in L1 facilitated their recognition in L2 [11], which implies an exchange of knowledge between German and English language categories. In addition, the authors concluded that this exchange activity is largely due to the overlapping labels between German and English, which suggests a possibility of phonological interference between L1 and L2 in task-switching [11]. This cognate facilitation raises the question of whether phonological assistance can only be observed in bilingual speakers who speak cognate languages and the extent to which this occurs. Further experiments of language acquisition in bilinguals who speak non-cognate languages (i.e., Chinese-Spanish; German-Korean) are needed to fully understand phonological assistance and its potential selectivity.

The phonological overlapping observation by Von Holzen et al. is largely due to the similar nature of L1 and L2: both German and English belong to Indo-European cognates which share overlapping labels. This similarity in linguistic features limits the generalization of the experiment. To fill out this gap, Lin et al. ‘s investigated the facilitation of phonological awareness in Chinese-English bilingual reading acquisition. The research group found bidirectional phonological transfer from L1 and L2 despite the language proficiency level: Bolstering the phonological awareness in one language facilitates the reading comprehension in the other language [7]. In this case, by bolstering phonological awareness in Chinese, participants showed improvement in English reading comprehension. This finding is significant because it indicates that there is an exchange of communication between two language systems, and the process of acquiring two languages relies on this exchange. As articulated by Lin, Chinese rime & tone awareness significantly facilitated English word reading through phoneme awareness, and vice versa [7]. Notably, their experiment was conducted in the U.S. where English is the dominant language. This imbalance in practice time, language inputs, or other contextual effects influences the simultaneous process of acquiring two languages. This highlights the importance of language settings embedded in the social-cultural environment in the process of bilingual language acquisition, and to what extent can it obstruct or facilitate the language-learning process.

Contextual effects in a semantic and social context:

Language environment plays a critical role in language acquisition, especially for bilinguals who require adequate inputs for both languages. In laboratory settings, Kaur investigated how different semantic contexts vary category interference in Bodo-Assamese bilinguals. The result showed a significant three-way interaction amongst List Type, Bilingual Proficiency, and Target Language, indicating the subscription level of the semantic effect differs in three conditions. This study, by manipulating language settings, aims to explore the various cross-language effects in the dynamic L1 and L2 processing [6]. To capture the big picture of contextual effects and the systematic influences in bilingual language acquisition, a greater scope of language environment has to be taken into account. To accomplish this, O’Toole et al. utilized the longitudinal approach to investigate the L1 acquisition in a minority context for Irish-English bilingual children. By accessing data from caregivers and children, the authors found that contextual effects have a significant impact: Even for households where Irish is primarily spoken, the Irish vocabulary for bilingual children is still low. Despite the naturalistic language setting of this study and its understanding of the causes for delayed language acquisition, the problem of minority languages is extensive. The dominant social status of English limits the variety of language types and puts more languages at risk of disappearing, just like Irish. Gaeltacht, where the experiment was conducted, has its demographic specialty. Its  intergenerational transmission problem cannot be generalized to other regions (i.e., Japan, Mexico, etc.), and the result of this study also faces a similar generalization issue.

Kaur recruited Bodo-Assamese bilinguals (N=52; female: 23) and conducted two experiments for the purpose of testing word naming in both L1 and L2. The author accessed data from language background questionnaires and two versions of the Objective Naming Test. Across two experiments, three independent variables were introduced: Cognate Status (cognate vs. noncognate), List Type (categorized vs. randomized), and bilingual proficiency level [6]. The results in the first experiment testing for word naming in L2 showed that participants took a significantly longer time in naming categorized words compared to randomized words [6]. This indicates category interference when the word list is semantically organized. In the second experiment, the results showed a significant interaction between Cognate Status and List Type: the cognates were named significantly slowly in L1 for the categorized list, compared to noncognate words. This indicates that the Cognate Status didn’t affect word naming directly, reinforcing semantic context bolsters the cognate factor. Both experiments showed significant category interference effects and highlighted the role of semantically-related context in L1 and L2 word naming. Nevertheless, examining the language processing by meditating semantic context only on a phonological level is not sufficient to understand the whole topic. Contextual effects in bilinguals are not limited to semantic variations and can be investigated in a broader range.

O’Toole et al. used the longitudinal approach and recruited Irish-English children (N=21) under 36 months and their main caregivers. They employed the ICDI checklist and a brief version of PaBiQ-IT [8], and asked caregivers to complete these checklists every four months. Caregivers were asked to retrospectively report the frequency of speaking Irish and English in the households in five levels: always, usually, sometimes, rarely, or never. Interestingly, the results demonstrated that children’s vocabulary acquisition of Irish was not significantly influenced by any frequency levels of spoken Irish in the households. In fact, main caregivers reported that using Irish usually and mostly in homes was not significantly better than rarely using Irish in terms of improving children’s Irish vocabulary. Researchers pointed out this result as a concern as the contextual effect of English outside the households outweighs the in-home Irish inputs. In addition, the authors articulated the prevalent language use in English in a social context: children used more English nouns, greetings in English, and English had a higher social status than Irish with a cultural lens. Notably, the participants recruited in this study had relatively higher socioeconomic status (SES). Although SES does not significantly correlate with the Irish vocabulary acquisition [8], it inevitably questions the generalizability of the study. Considering the relatively small sample size (N=21) and the uneven distribution of SES, the results are not able to be generalized to other bilingual speakers and demographic dimensions.

Although a wide body of research reveals significant phonological facilitation for acquiring a second language, the majority of studies target bilinguals whose first language is cognate with Indo-European languages (i.e. English, German, etc.). This language default leaves minority languages with fewer groundworks to be researched and hinders the generalizability of this topic. Hence, more research needs to focus on investigating diverse bilingual speakers to solidify the generality of phonological facilitation.

On the other hand, O’Toole et al. articulated that even with a decent amount of practice time in the household, Irish-English bilingual children still received inadequate Irish language inputs and have lower Irish vocabulary compared to English [8]. More studies are needed to reveal the critical role of contextual factors in bilingual language acquisition. In a broader scope, a rich number of studies recruited typical hearing developing children to prove validity for the generality of phonological differentiation. This approach is biased by excluding atypical language development – such as hearing impaired children, and more studies should examine language acquisition processes in atypical-developing bilinguals.