Authors Note: This past summer I was given the incredible opportunity to work in the Thurmond Lab at the City of Hope where I investigated a point mutant of the Syntaxin 4 protein on -cell function and apoptosis. The following piece reviews a publication that was fundamental to both the understanding and methodology of my project.

Cisplatin (CDDP) is a widely used chemotherapy drug that induces apoptosis in solid tumor cells, which are cells that lack cysts or liquid areas such as carcinomas, sarcomas, and lymphomas. The platinum-based chemotherapeutic agent was popularized in the late 1970s as the antitumoral toxicity of platinum compounds became known for their clinical efficacy against solid tumors (1). Although initially promising, many patients suffer a relapse due to the development of cisplatin resistance, largely as a result of their ability to overcome the apoptogenic effects of the drug. To elucidate the underlying mechanisms behind the propagation of cancer progression and chemotherapy resistance, an understanding of the tumor microenvironment is crucial. The tumor microenvironment is comprised of a complex and dynamic milieu that surrounds stromal cells. Among these cells, tumor-associated macrophages (TAMs) represent the largest population of infiltrating inflammatory cells in malignant tumors. TAMs have been suggested to possess a tumor-promoting phenotype that drives multiple mechanisms, most notably tumor cell proliferation and drug resistance (2). Initially, TAMs are in the classically-activated M1 state, in which their proinflammatory characteristics disables tumor growth. As tumors mature, however, they switch to an alternatively-activated M2 state, promoting tumor development and immunosuppression. As M2-like TAMs are major contributors to chemotherapeutic resistance, they are frequently targeted for cancer immunotherapies.

M2-like TAMs are capable of producing nitric oxide (NO) via expression of inducible NO synthase (iNOS). NO is an important cell signaling molecule that is critical for many physiological processes such as neurogenesis and angiogenesis (3). At low levels, NO displays cytoprotective properties, promoting tumor growth, but can be cytotoxic to tumor cells when produced at high levels (4). The cytoprotective tendency of NO has been linked to the inhibition of the sphingomyelin-metabolizing enzyme acid sphingomyelinase (A-SMase). Traditionally, the activation of A-SMase (most commonly by chemotherapeutic drugs such as CDDP) drives the hydrolysis of sphingomyelin to generate ceramide. Ceramide, in coalition with other molecules, forms a cluster that drives transmembrane signaling of apoptotic death to effectively kill tumor cells (5). By contrast, it has been found that at relatively low concentrations NO hinders the beneficial apoptotic effect of A-SMase, resulting in resistance to the chemotherapeutic drug CDDP. The elucidation of this mechanism is the focus of research conducted by Perrotta et al. in 2018.

A study led by Perrotta et al. investigated the potential for NO, a byproduct of TAMs, to be responsible for the mechanism conferring resistance to CDDP (6). An increased concentration of intracellular NO leads to the activation of the membrane-bound protein Syntaxin 4 (STX4) via a pathway that involves the production of cGMP and activation of protein kinase G (PKG). As STX4 aids in the translocation of A-SMase, an enzyme involved in apoptosis, to the plasma membrane, a decrease in the STX4 protein would result in resistance to the intended apoptotic effect of CDDP (Figure 1). However, it was found that a point mutant of the STX4 protein, namely the STX4-S78A mutant, is unable to be phosphorylated by PKG due to the chemical nature of the alanine side chain. This prevents proteasomal degradation, thus leading to successful tumoral apoptosis. 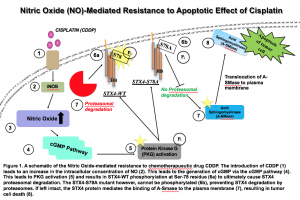 A schematic of the Nitric Oxide-mediated resistance to chemotherapeutic drug CDDP. The introduction of CDDP (1) leads to an increase in the intracellular concentration of NO in TAMs (tumor associated macrophages). (2). This leads to the generation of cGMP via the cGMP pathway (4). This leads to PKG activation (5) and results in STX4-WT phosphorylation at Ser-78 residue (6a) to ultimately allow degradation of STX4 via the proteasome. The STX4-S78A mutant however, cannot be phosphorylated (6b), preventing STX4 degradation by proteasomes. If left intact, the STX4 protein mediates the binding of A-SMase to the plasma membrane (7), resulting in tumor cell death (8).

The presence of M2 polarized TAMs in U373 human glioma cells were confirmed through immunostaining of the M2 subtype marker CD206 and iNOS. The presence of double positive cells illustrated the ability for M2-TAMS in glioma cells to produce NO. To investigate the effect of CDDP-induced apoptosis, human glioma cells were cocultured with M2-TAMs and then treated with CDDP in the presence of the iNOS inhibitor L-NAME. Annexin V apoptosis staining data illustrated a three-fold decrease in tumor cell death when CDDP-treated U373 glioma cells were cocultured with M2-TAMs. However, the addition of L-NAME resulted in a roughly two-fold increase in the abundance of dead tumor cells. Similar results were observed in the GL261 murine cells. This demonstrates that NO induces resistance to the apoptotic effect of CDDP as the inhibition of the NO precursor iNOS resulted in increased efficacy of the CDDP treatment.

The NO pathway operates via activation of the cGMP pathway. This was confirmed by administration of ODQ, a guanylate cyclase inhibitor that prevents NO-dependent cGMP generation, and DETA-NO (an NO donor) to U373 cells treated with CDDP. Results indicated a roughly two-fold increase in the percentage of apoptotic cells when treated with cGMP inhibitor ODQ, illustrating that the cGMP pathway is a significant contributor to CDDP. The generation of cGMP is correlated with the inhibition of CDDP-induced apoptosis, therefore, the presence of a cGMP inhibitor (ODQ) should increase levels of apoptosis, which is reflected in the data.

It has been previously demonstrated that acid sphingomyelinase (A-SMase) is activated by CDDP. A-SMase activation often occurs via translocation to the plasma membrane, therefore a cell surface biotinylation assay was used in U373 to confirm increased expression of A-SMase at the plasma membrane 30 minutes post-CDDP treatment. As expected, western blotting data indicated heightened expression of the enzyme when compared to A-SMase expression in U373 cells treated either with DETA-NO or 8Br-cGMP (an activator of cGMP-dependent kinases).

The final step of the pathway conferring resistance to CDDP involves the phosphorylation of Syntaxin 4 (STX4). STX4 is a membrane-bound SNARE protein. SNARE proteins form a SNARE core complex that orchestrate vesicle fusion to the plasma membrane. In tumor cells, STX4 is known to control the trafficking of A-SMase from intracellular compartments to the plasma membrane, allowing the A-SMase to carry out the intended apoptotic effect of CDDP. However, data shows that the phosphorylation of STX4 at the Ser-78 residue promotes its subsequent proteasomal degradation.

It has been found that NO released by M2-polarized TAMS has led to resistance against a widely used chemotherapy drug CDDP. This is achieved via the generation of cGMP and the activation of PKG in response to increased intracellular concentrations of NO. This leads to phosphorylation of the STX4 protein at Ser-78, resulting in its degradation. The decrease of the STX4 protein immobilizes A-SMase, preventing the enzyme from reaching the plasma membrane to initiate tumoral apoptosis.

As previously mentioned, the effect of NO in large quantities yields cytotoxic properties. In smaller concentrations however, NO has exhibited protective effects. The dichotomous behavior of NO on tumor biology could be a result of a myriad of factors, including the conditions of the tumor microenvironment and its origin. The generation of NO by TAMs protects tumor cells from apoptosis through the indirect inhibition of A-SMase activity. It is important to note that this action is dependent on the ability of NO to generate cGMP in tumoral cells and block the CDDP-induced, STX4-dependent translocation of A-SMase to the plasma membrane.

The elucidation of a chemotherapeutic resistance mechanism provides an understanding of Cisplatin’s efficiency and the origin of its drug-resistant tendencies. The observed proteasome-dependent degradation of STX4 may also be relevant to cancer therapies based on proteasome inhibitors. Prevention of the proteasomal degradation mechanism would increase efficacy of many chemotherapeutic treatments. This is due to the preservation of pro-apoptotic factors which would permit the programmed cell death of various proteins, preventing the accumulation of deleterious proteins. Currently, proteasome inhibitors are approved for treating multiple myeloma, a cancer of plasma cells or cells that produce antibodies. As NO is a major signaling molecule in the immune system, the elucidation of the CDDP resistance pathway yields further insight into how NO operates and proliferates. This renders research put forth by Perrotta et al. applicable to various fields of research beyond cancer.