Author’s Note: I started research on aphasia for an upper-division writing class, and was intrigued by the potential of brain stimulation as an effective and practical treatment option for aphasia, with potential to treat other brain disorders. Finding an intersection between neuroscience, technology, and linguistics is critical to broaden speech therapy treatment. I hope readers will be excited by the possibilities that advancements in neuroscience have in healthcare.

Forms of “language” are found in many kinds of species. This suggests an innate desire for communication and a neural predisposition to do so. The human brain is specialized for spoken language, such that acute damage or acute stimulation to language processing areas can modulate a person’s fluency of speech. From having a heart-to-heart with a good friend, chatting with a local barista, or updating your doctor on your symptoms: verbal communication mediates a casual relationship between your inner world and the outer one. Wants, needs, worries, and tiny little things you just have to get off your chest can be articulated without second thought.

Now, imagine being stripped of the ability to communicate with the outer world. An individual’s increasing forgetfulness or tendency to stumble over their words might not be indicative of normal cognitive decline as a result of aging. Instead, subtle decreases in fluency might be symptoms of aphasia: a common and incurable language disorder, usually an effect of underlying brain damage. People with aphasia are perfectly intelligent and cognizant, but are limited in their ability to read, speak, and understand language.

Aphasia affects almost 2 million Americans; nearly a third of those who experienced a stroke develop aphasia because of damaged language processing areas in the brain [2]. Aphasia refers to language impairments that disrupt the ability to access ideas and thoughts through language; it does not disrupt the ideas and thoughts themselves. The onset of aphasia is associated with brain damage, developed concurrently with a disease like Dementia or following an injury like a stroke. Patients with aphasia may have trouble verbalizing their thoughts in several ways: jumbling words together, speaking gibberish, substituting one word for another, poor grammar, speaking in short sentences, trouble retrieving words or names.

Gradual yet consistent symptom improvements are typically nurtured by a speech language pathologist. To increase working vocabulary, common speech therapy techniques include conversational therapy, word finding, and naming tasks during weekly or bi-weekly sessions over the course of months or years. Although prior research in stroke patients suggest that increasing duration of sessions, sessions per week and the number of weeks of speech therapy are best for improving speech, the inconvenience and cost is a significant impediment to its implementation [3]. So how can people learn and retain more linguistic information at a faster rate? This is where neuroscientists enter the conversation. Non-invasive brain stimulation can mimic and amplify the effects of activities we regard as ‘mentally stimulating.’

Non-invasive imaging technology can pinpoint brain areas associated with speech impairments, and applying acute electrical current triggers neural changes associated with language learning. The neural changes as a result of therapy can be observed either through functional neuroimaging, like fMRI, revealing the areas of activation, or by quantifying changes in brain structure, in the number and volume of fiber bundles in processing areas [4]. Neural connections, or synapses, are the physical mechanism of learning. When synaptic connections become vulnerable due to the applied electrical currents, having higher neuroplasticity, learning occurs most rapidly. Often neuroplasticity is cited in the context of infants whose brains develop at an incredible rate. However, any experience, task, or event will modify the connections in your brain. Therefore, artificially increasing neuroplasticity through electrical brain stimulation amplifies the effects of a learning experience. It is unclear whether brain stimulation induces true ‘learning’, or the reactivation of dormant, inaccessible information [4].

In the context of aphasia, brain stimulation is paired with conventional speech therapy tasks to accelerate the rate of language improvements. Brain stimulation can be performed at little cost to patients, typically through transcranial direct current stimulation (tDCS). tDCS involves placing two electrodes on the surface of the scalp and sending a small electrical current to the brain. 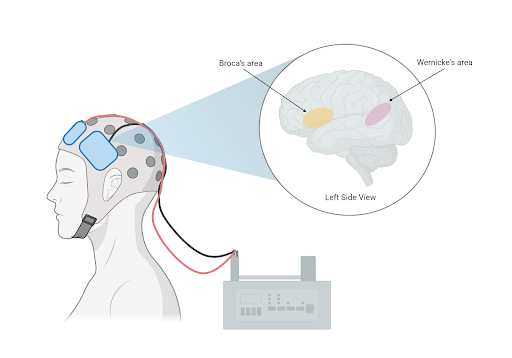 The process is completely non-invasive, described by patients as a tingly feeling. tDCS treatment is in the experimental stages for other types of disorders where brain abnormalities are relatively localized and widely researched, including depression and anxiety.

Neuroscientists have identified and experimented with tDCS to major language processing areas in the brain, where damage is linked to aphasia. Within the left Inferior Frontal Gyrus, ‘Broca’s area’ is primarily responsible for speech production. Damage to Broca’s area causes trouble naming and may restrict speech to short, ungrammatical sentences. Research in stroke patients shows combining tDCS to Broca’s area with word-repetition tasks improves accuracy in speech production, while conversational therapy enhances picture, noun, and verb naming [2]. Likewise, ‘Wernicke’s area’ in the Superior Temporal Gyrus is associated with speech comprehension. Predictably, impairments to Wernicke’s area cause deficits in understanding others’ speech and writing. Researchers found the combined stimulation of this area and speech therapy improved verbal comprehension. While Broca’s and Wernicke’s area have been thoroughly investigated, several studies have used MRI to locate brain damage before experimenting with the application sites of tDCS. Other studies have applied tDCS to unconventional brain areas with mixed effects. Stimulation to the cerebellum has enhanced spelling ability, while stimulation to the primary motor cortex improved naming ability on trained words [5].

The effectiveness of tDCS is verifiable through controlled clinical trials. ‘Sham-tDCS’ acts as a placebo: it produces a tingling sensation in the scalp without affecting neural functions, leading patients to believe they were receiving true tDCS. In many instances, the groups receiving sham-tDCS showed some improvements, although not as significant as the group receiving true-tDCS. This could be attributed to effective speech therapy tasks themselves or a mild placebo effect. Regardless, the superiority of the treatment group was exacerbated over time: after 6 months the sham-tDCS group showed a significant decrease in the initial improvements made [5]. This suggests tDCS not only promotes learning but is important for long-term maintenance.

Scientists’ understanding of the short-term and long-term impacts of tDCS, the specifications of the treatment, and how exactly speech therapy modifies the brain is growing. Unanswered questions remain about the parameters and expected outlook for the treatment. What is the best combination of speech therapy tasks and stimulation sites? How many sessions of tDCS are necessary? How long should electrical current be applied for? What kind of results should be expected? How should you expect conversational ability to change?

Tentative answers to these questions establish tDCS as a feasible supplement to speech therapy. Knowledge about brain structure and linguistic function create an interdisciplinary approach to aphasia treatment. Modern treatments like tDCS are enabled by technology and mitigate the time and cost barrier of intensive speech therapy. Healthcare workers and neuroscientists, and patients might benefit from investigating how to make brain stimulation a mainstream treatment for aphasia.