Author’s Note: Previous studies in neuroscience have suggested that our expectations and prior experiences impact how we perceive reality and current tasks. This idea is embedded in Bayesian integration, also referred to as multisensory integration, which essentially studies how the brain combines information obtained from sensory neurons to affect perception and create a distinct outlook on an organism’s surroundings. It defines how we view and think about our environment.

This topic was particularly interesting to me because expectations can serve to aid our further understanding of incoming information, but can also inhibit our understanding if the new information contradicts our predictions.

Scientists classify expectations as essentially creating a placebo effect. The idea is that an individual’s expectations can influence the outcome of a certain treatment, their personal performance, or their feelings towards a person, place, or object. These “prior beliefs” can shape our reality and influence our perception of things we encounter in our daily life. The source of this placebo is argued to either be due to a conditioned response, where a situation has occurred multiple times with the same outcome (behaviorist approach) or that the placebo is a result of expectancy (expectation approach) (4).

In a recent study by MIT, researchers argued for the latter hypothesis suggesting that expectations are the suspect for shaping our interpretation of our surrounding environment. MIT neuroscientists were inspired by the idea of Bayesian integration, which is the process of incorporating prior knowledge with new and uncertain information (6). Jazayeri et al. trained monkeys in a task called “ready-set-go.” The monkeys are shown a starting signal and ending signal. After seeing both signals, they are expected to press a button after the same time interval between the starting and ending code has passed (6). The neuroscientists had short intervals, which spanned from 480 to 800 milliseconds and long intervals, which were 800 to 1,200 milliseconds. The monkeys were given a visual cue at the start of each trial signalling whether the trial would be a “short” or “long” scenario (6).

The MIT researchers wanted to further determine which areas of the brain are responsible for the influence of expectations from the short and long trials affected the perception of the length of time for the 800 msce interval. Jazayeri et al, found that prior experiences strengthen a pattern of synaptic connections in a region located in the frontal cortex, which has previously been determined to be involved in temporal resolution (6). These patterns of synaptic connections were further computationally modeled. These models were found to perform the tasks in the same manner as the monkeys used in the previous experiments.

In another study at the University of Wisconsin, researchers conducted a similar study in humans testing how prior expectations of taste can influence an individual’s perception of the taste. Sarinopoulos et al. tested how subjects responded to an aversive taste, which was a diluted solution of quinine hydrochloride, with deceiving and accurate cues to test how placebo altered the participants’ responses. One group was informed that they were about to receive a highly aversive taste, while the other group was deceived and told they would receive a less aversive taste. The group told that they would receive a less aversive taste acted as the experimental group and were used to test whether placebo is altered by expectations or further stated if expectations affect our perception. Sarinopoulos et al. compared the expectancy effect from the highly aversive to less aversive groups by measuring changes in the insula and the amygdala, which are activated by aversive tastes (5).

The insula is associated with pain processing, which explains the presence of many sensory receptors for visceroceptive, referring to signals received from the heart, lungs, stomach, bladder, and other internal organs near the trunk region, and interoceptive inputs, including regions of the brain such as the thalamus, brainstem, insula, somatosensory, and anterior cingulate cortex (2). The amygdala, located near the insula, specifically the medial temporal lobe forms a part of the limbic system and plays a fundamental role in emotion processing, specifically fear and pleasure (1).

The study was conducted using rapid event-related fMRI design. In order to create a basis of comparison, the study included various conditions with different levels of aversion and manipulation – totaling to seven experimental conditions. The wide array of conditions allows Sarinopoulos et al. to eliminate differences if the perception involves a more aversive or less aversive taste by including both aversive and pleasant taste with varying perceptions. 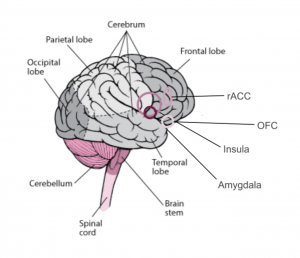 They found that subjects demonstrated a consistent pattern of rostral anterior cingulate cortex (rACC), which plays an important role in decision-making and attention, and orbitofrontal cortex (OFC), which is also involved in decision-making, activation when presented with the misleading cue, followed by a decrease in the bilateral insula responses to the highly aversive taste. It was also associated with a smaller amygdala response. These findings suggest that the rACC and OFC are both correlated with the placebo effect and are associated with the aversive and pleasant perception of taste.