Author’s Note: Growing up, playing the piano was a major part of my life— weekdays were filled with hour-long practices while Saturdays were for lessons. My schedule was filled with preparations for board exams and recitals, and in the absence of the black and white keys, my fingers were always tapping away at any surface I could find. My parents always told me learning the piano was good for my education and will put me ahead in school because it will help with my math and critical thinking in the long run. However, I was never able to understand the connection between the ease of reading music and my ability to calculate complex integrals. In this paper, I will extrapolate on the benefits of learning an instrument in cognitive development.

What do Albert Einstein, Werner Heisenberg, Max Planck, and Barbara McClintock all have in common? Other than their Nobel-prize winning research in their respective fields, all of these scientists share the love of playing a musical instrument. At an early age, Einstein followed after his mother in playing the violin; Heisenberg learned to read music to play the piano at the young age of four; Planck became gifted in playing the organ and piano; McClintock played the tenor banjo in a jazz band during her time at Cornell University [1]. While these researchers spent time honing in on their musical talent, they were engaging both their central and peripheral nervous systems. Playing an instrument requires the coordination of various parts of the brain working together. The motor system gauges meticulous movements to develop sound, which is then picked up by the auditory circuitry. Simultaneously, sensory information picked up by fingers and hands are delivered to the brain. Furthermore, individuals reading music use visual nerves to send information to the brain. This is then processed and interpreted to generate a response carried out by the extremities. All the while, the sound of music elicits an emotional response from the player. 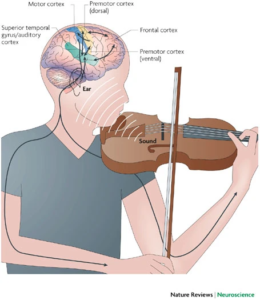 Feedforward and feedback pathways of the brain are two auditory-motor interactions that are elicited while playing an instrument. Feedforward interactions are predictive manners that can influence motor responses. For example, tapping to the rhythm of a beat in anticipation of the upcoming flux and accents in the piece. Alternatively, feedback interactions are particularly important for stringed instruments such as the violin, where pitch changes and requires continuous management [12]. As shown in Figure 1, the musician must auditorily perceive each note and respond with suitably timed motor changes. All of these neurophysiological components raise questions as to how musical training can confer brain development. Longitudinal studies find that musical training can have an expansive benefit in the development of linguistics, executive function, general IQ and academic achievement [2].

Music shares the same dorsal auditory pathway and processing center in the brain with all other sounds. This passageway is anatomically linked by the arcuate fasciculus, thus suggesting instrumental training will translate to the manifestation of language related skills. This unilateral pathway is central to an array of language related skills, including language development, second-language acquisition, and verbal memory [2]. According to Vaquero et al, “Playing an instrument or speaking multiple languages involve mapping sounds to motor commands, recruiting auditory and motor regions such as the superior temporal gyrus, inferior parietal, inferior frontal and premotor areas, that are organized in the auditory dorsal stream” [10].

Similarly, Dr. Patel suggests the existence of an overlap of shared brain connections amongst speech and music due to the requirement for accuracy while playing an instrument. Refining this finesse demands attentional training combined with self-motivation and determination. Repeated stimulation of these brain networks garner “emotional reinforcement potential” which is key to “… good performance of musicians in speech processing” [3].

Beyond stimulating auditory neurons, instrumental training has been shown to improve verbal memory. For example, in a comparative analysis, researchers find children who have undergone musical training demonstrate verbal memory advantages compared to their peers without training [4]. Furthermore, following up a year after the initial study, they found that continued practice led to substantial advancement in verbal memory, while those who discontinued failed to show any improvement. This finding is supported by Jakobson et al in which researchers correlate, “… enhanced verbal memory performance in musicians is a byproduct of the effect of music instruction on the development of auditory temporal-order processing abilities” [5].

In the case of acquiring a second language [abbreviated L2], a study conducted on 50 Japanese adults learning English finds, “… the ability to analyze musical sound structure would also likely facilitate the analysis of a novel phonological structure of an L2” [6]. These researchers further elaborate on the potential of improving English syntax with musical exercises concentrating on syntactic processes, such as “… hierarchical relationships between harmonic or melodic musical elements” [6]. Multiple studies have also identified music training to invoke specific structures in the brain also employed during language processing, including Heschl’s gyrus and Broca’s and Wernicke’s areas [2].

While music and language elements are stored in different regions of the brain, the common auditory pathway gives way to instrumental training strengthening linguistic development in multiple areas.

Executive function is the application of the prefrontal cortex to carry out tasks requiring conscious effort to attain a goal, particularly in novel scenarios [7]. This umbrella term includes cognitive control in attention and inhibition, working memory, and the ability to task switch. Psychologists Dr. Hannon and Dr. Trainor find formal musical education to be a direct implementation of, “… domain-specific effects on the neural encoding of musical structure, enhancing musical performance, music reading and explicit knowledge of the musical structure” [8]. The combination of domain-general development and executive functioning can influence linguistics, in addition to mathematical development. Whilst learning an instrument, musicians are required to actively read music notes considered to be a unique language and focus on the ability to translate their visual findings into precise mechanical maneuvers, demanding careful focus. All the while, lending attention to identify and remedy errors in harmony, tone, beat, and fingering. Furthermore, becoming well-trained requires scheduled rehearsals to build a foundational framework for operating the instrument while learning new technical elements and building robust spatial awareness. Thus, this explicit practice of executive function during these scheduled practice sessions are essential in sculpting this region of the prefrontal cortex.

While listening to music has been found to also confer academic advantage, the active practice of deliberately playing music in an ordered process grants musically apt individuals scholastic benefits absent in their counterparts. In a study conducted by Schellenberg, 144 six year-olds were assigned into one of four groups– music groups included keyboard or voice lessons while control groups provided drama classes or no lesson at all. After 36 weeks, using the Wechsler Intelligence Scale for Children–Third Edition (WISC-III),composed of varying assessments to evaluate intelligence, data supports all four groups having a significant increase in IQ. However, this can also be attributed to the start of grade school. Despite the general rise in IQ, individuals that received keyboard or voice lessons proved a greater jump in IQ. Schellenberg discusses this finding of musically-trained six year-olds demonstrating elevated IQ scores to mirror that of school attendance. He reasons participation in school increases one’s IQ and the smaller the learning setting is, the more academic success the student will be able to achieve. Similarly, music lessons are often taught individually or in small groups which mirrors a school structure, thus ensuing IQ boosts.

While these studies have found a positive correlation amongst individuals learning musical instruments with varying brain maturation skills, these researchers mark the importance in taking into consideration confounding factors that often cannot be controlled for. These include socioeconomic level, prior IQ, education, and other activities participants are associated with. While many of these researchers worked to gather subjects with similarities in these domains, all of these external elements can play an essential role during one’s developmental period. Moreover, formally learning an instrument is often a financially hefty extracurricular activity, thus more affluent families with higher educational backgrounds can typically afford these programs for their children.

Furthermore, each study implemented varying practice times, music training durations, and instruments participants were required to learn. The data gathered from these findings can elicit results that may not be reproducible under different parameters.

Beyond these external factors, one must also consider each participant’s willingness to learn the instrument. If one does not hold the desire or motivation to become musically educated, spending the required time playing the instrument does not necessarily correlate to positive results with development as those regions of the brain are not actively utilized.

Numerous studies have been carried out to demonstrate the varying benefits music training can provide for cognitive development. Extensive research has proven that the process of physically, mentally, and emotionally engaging oneself to learning an instrument can award diverse advantages to the maturing brain. The discipline and rigor needed to garner expertise in playing a musical instrument is unconsciously translated to the experimental setting. Likewise, the unique melodious tunes found in each piece sparks creativity to propose imaginative visions. While instrumental education does not fully account for Einstein, Heisenberg, Planck and McClintock’s scientific success, this extracurricular activity has been shown to provide a substantial boost in critical thinking.