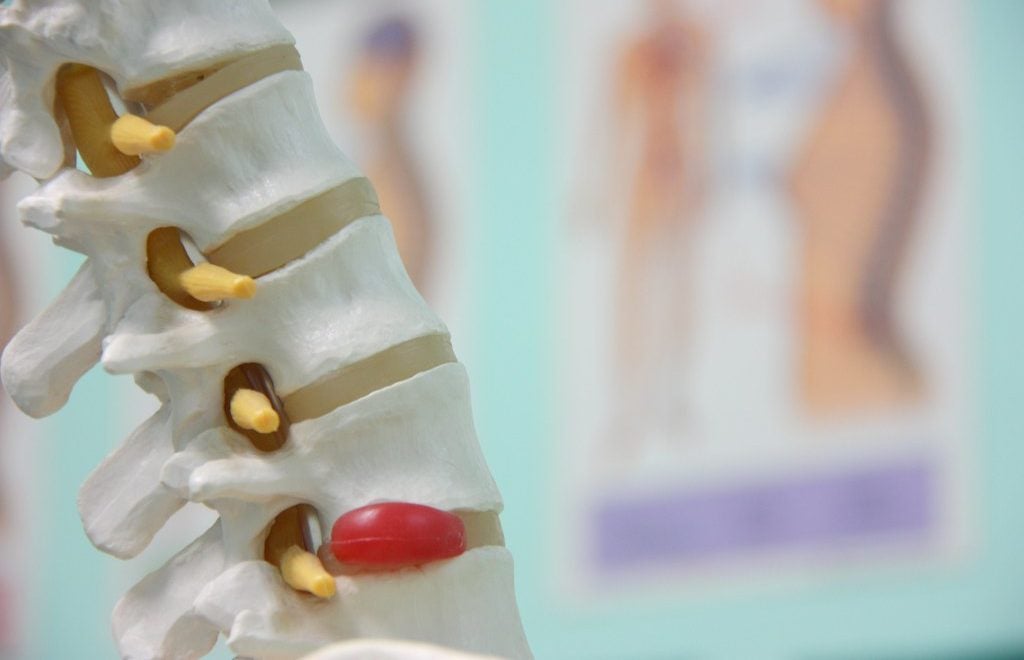 Author’s Note: I wrote this literature review for my UWP 104F class in my fourth year at UC Davis. My goal is to become a physical therapist and one of the most common complaints I hear from older generations is that they cannot perform activities they once loved because of a ‘bad back.’ My father experienced a disc related injury, which led to sciatica, after he fell off a ladder. This prevents him from enjoying activities such as heavy-lifting, riding roller coasters or picking up his grandson. For these reasons, I was interested in researching effective prevention and treatments to help alleviate discomfort and improve quality of life.

A disc herniation is one of the most common injuries leading to chronic low back pain and disability. At some point in their lives, approximately 84% of adults experience low back pain, causing this to be a significant universal healthcare concern [1]. A herniated disc is a problem in which the nucleus pulposus or annulus fibrosis of intervertebral discs are pushed out beyond allowable disc space [2]. Herniation may produce an agonizing condition known as sciatica, radicular pain throughout the sciatic nerve [3]. The resulting chronic pain can become debilitating and a socioeconomic difficulty correlative to discomfort severity, necessary treatment and psychological or social consequences. According to Andersson et al., as cited by Khan et al., “The direct and indirect costs associated with LBP in the United States are estimated to be upwards of $100–200 billion per year, more than half of which is due to loss of income and lack of productivity” [1]. These disabling symptoms which threaten the quality of life, call for more effective treatments and therapies to alleviate pain and prevent the condition from progressing.

Healthcare providers often suggest surgery, such as discectomy, to treat the cause of intractable pain. However, surgeries cannot completely cure the disability and the positive outcomes experienced by expensive and risky surgeries may only be temporary [4]. There are alternative treatments that may alleviate symptoms, such as exercise therapies and epidural steroid injections. Advantages of nonsurgical treatments include long-lasting benefits for some patients without the risk of potential damage to nerves, less postoperative pain, and decreased time away from work [5]. Although there are some negative outcomes, there is significant research on various surgical treatments and the short-term effects. However, research comparing the long term efficaciousness of nonsurgical options to surgery is negligible. This could partly be due to the difficulty of conducting a valid study where human nature is concerned. Patients assigned to stretching, exercise and pain medication, are less likely to remain compliant, and at any point during the study they may request surgery.

The purpose of this literature review is to analyze a variety of research studies regarding  treatments, and discuss the long term outcomes. This review additionally examines and contrasts nonsurgical and surgical intervention, with the goal of discovering and emphasizing the need for alternative care for symptom relief.

The spine is composed of intervertebral discs which are made of soft connective tissue, and function in shock absorbing, spinal flexibility and providing rigidity to the skeleton while allowing limited rotation and bending [1,6]. The center of an intervertebral disc consists of the nucleus pulposus, which is a gelatinous core, and the outer annulus fibrosis, which maintains disc structure [6,7]. Herniated discs can be caused by repetitive overuse, age related deterioration of discs, or a traumatic injury [6]. Degenerative changes occur with age as the discs dry out and crack with overuse and repeated irritation [1]. Studies have shown that most herniations occur when there is a rotational or compressive force applied while the back is in an anterolateral flexion position, resulting in bulging and slippage of the nucleus pulposus in the posterolateral direction [6]. This means that there is strain on the annulus fibrosis and pressure on the nucleus pulposus as it moves in the opposite direction of bend. Sciatica becomes a symptom of disc herniation once extrusion of the disc exerts force on the sciatic nerve roots [3].

Physical therapy programs encompass trunk and core strengthening, improved lumbosacral flexibility and low impact aerobic activity [7,8]. These methods increase stability and alleviate tension on the spine, thereby resulting in less pain or risk of long term disability [7]. Elnaggar et al. evaluated the efficiency of spinal flexion and extension exercises by instructing participants to perform these movements each day [9]. Researchers concluded that extension exercise was the most effective in reducing pain but that these differences could be attributed to variables such as patient age and initial severity of pain [9].

Daily living requires an extensive range of motions such as rotation and side bending, so the addition of a yoga program may have long-term beneficial effects. In a study by Tilbrook et al., individuals with low back pain were introduced to a yoga program that taught pain-relieving poses to strengthen weak areas of the body [10]. Although the participants did not report any pain reduction, they did enjoy an improved ability to perform everyday activities [10]. Takaki et al. discussed the importance of posture attention during exercises [11]. If a patient had excessive tilting of the pelvis, this may promote extension of the lower back, leading to compression of the vertebrae [11]. To correct their posture, strengthening the abdominal muscles assisted in tilting the pelvis posteriorly, consequently reducing lower back pain [11]. Emphasizing awareness of posture may lessen stress on the spine and prevent further injury.

Surgical interventions are often used when there are continuous nerve root symptoms [12]. Of the various surgical options, discectomy is the “most frequent lumbar spine operation in the US,” involving removal of the disc that is pressing on the nerve root [13]. One study treated patients suffering from sciatica resulting from disc herniation with surgery or nonsurgical methods [13]. A ten-year follow up found that the magnitude of improvement in leg pain for surgically treated patients was greater than that of the nonsurgically treated, however, there was no difference in improvement in disability between the two groups [13].

In research conducted by Weinstein et al., self-reported measurements of pain and physical function scales were utilized to compare the effectiveness of surgery to non-surgical interventions for patients with lumbar disk herniation [14]. Participants underwent surgery, or received non surgical treatment, such as physical therapy, education and counseling, nonsteroidal anti-inflammatory drugs, narcotic analgesic agents, or epidural injections. While both groups reported improvement in physical function and pain at three months, the surgical patients had more immediate and greater pain relief. Between three months and two years, the pain relief in the non surgical group was close to that of the patients receiving surgery. However, it appears that the patients who chose surgical intervention reported greater overall improvement than those who elected nonoperative care [14].

In an additional comparison of the two treatment options, the SPORT research trial, also concluded that early surgery may have a major advantage in faster relief of pain, quicker recovery, and return to work [14]. For those who are not surgical candidates, the alternative methods of care prove to be almost as effective as surgery following one year of treatment [14]. Long-term physical therapy and exercise are associated with decreased need for sick leave and a higher rate of return to work [8]. The results suggest that participants who utilize physical activity find their pain more manageable [14]. Findings by Weinstein et al. regarding patient reported satisfaction of surgical versus non surgical intervention appear contradictory [14]. On closer examination, Weinstein’s use of the word, manageable, with regard to the non surgical group, implies that this group benefited by learning coping mechanisms thereby leading to a more favorable perception of their pain level.

Epidural steroid injection is another viable option for controlling back pain due to disc herniation. Although it is one of the most popular and minimally invasive treatments, there is mixed research as to its efficacy. In a study by Manchikanti et al., 120 patients diagnosed with disc herniation or radiculitis, a nerve root disease, either received epidural injections with a local anesthetic or steroid [15]. The steroid injected patients report of superior pain relief  demonstrates that steroids, in contrast to local anesthetics, have greater results in pain reduction [15]. The authors in Winkelstein et al. discuss increased interest in epidural administration of immunosuppressants, the results of which point to an inflammatory response [16].These findings regarding the role of inflammation and immune response in triggering pain are a promising option for future research.

A three-year study, by Buttermann, sought to compare the use of epidural steroid injection vs surgery for the relief of herniated disc pain [4]. The results showed a decrease in pain and an increase in function in both groups, but 31% of the epidurals had little success [4]. In conclusion, compared to  epidural steroid injection, discectomy is more effective in reducing symptoms and disability [4].

Stem cell research towards regeneration of intervertebral discs is an exciting addition to an area of healthcare that has, as yet, seen little progress towards a permanent solution. The ability of a tissue to respond to stress or injury requires the involvement and function of stem cells resident in tissue-specific microenvironmental niches [17]. Investigations have found that a stem cell system is present in the intervertebral disc and aging has been shown to result in its decrease as well as the loss of the ability to maintain homeostasis and regenerate tissue function [17].

Although animal studies and preliminary human trials have supported the future of stem cell therapy for disc diseases, careful application of cells and techniques in a strictly controlled manner is key in ensuring safety. An example was given in which cell leakage was reported after MSC (mesenchymal stem cells) injection into the intervertebral disc [17]. This can cause osteophyte formation, potentially leading to nerve impingement [17]. There is optimism that stem cells can facilitate intervertebral disc tissue engineering and repair, but in our zeal for a promising restoration we cannot afford to cause harm. While there is considerable potential for the therapeutic use of stem cells in intervertebral disc degeneration, more research is necessary. The presumption is that it will be many years before stem cell therapy becomes a mainstream solution.

There are various research articles discussing the benefits of physical therapy and exercise in the treatment of chronic low back pain due to disc herniation. Core stabilization, recovering coordination, and flexibility through yoga also improves pain levels, decreases the risks of long-term disability and assists patients in returning to their daily routine. The exercises, however, must be demonstrated accurately by a professional who has the knowledge of biomechanics and is capable of ensuring that the patient performs the exercises correctly.

Epidural steroid injections may alleviate pain and enhance function, but do not cure the underlying cause of pain. An interesting future study may be to seek a method of predicting which patients will benefit from an epidural steroid injection. There is no substantial evidence that surgical treatments result in superior pain relief long term.  Nor is there evidence that surgery can fully treat disc herniation. Surgery is the most effective treatment for immediate relief of herniated discs, but further research in regards to alternative therapy is anticipated. There are promising studies in the field of stem cell transplants with the potential for regeneration of intervertebral discs. However, chronic low back pain perseveres as one of the most socioeconomically and life debilitating conditions. As such, it requires further research regarding alternative treatment options. Patients require therapy that, not only alleviates, but heals the cause and root of back pain in the intervertebral discs, controls symptoms such as pain and sciatica, and prevents damage or loss of function.