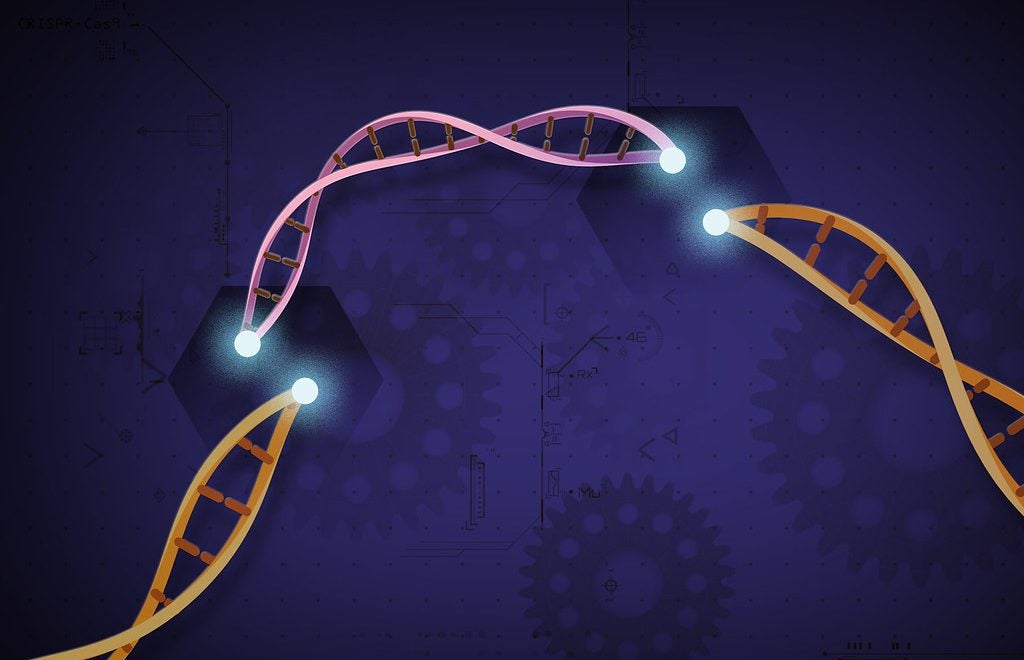 By Tannavee Kumar, Genetics and Genomics, ’20

Author’s Note: When I found out that CRISPR was used for the first time on human embryos that were fully brought to term, I was pretty surprised that such a new technology with numerous unknowns was being used on the germline. I was interested in understanding the reasoning for such an experiment and what may come out of it in the long run. To some, CRISPR may seem like a far off technology that could be applied to humans in the distant future. However, the experiment on the twin fetuses that went through this “genetic surgery” proves that CRISPR is happening now and is likely to stay.

But first, how does CRISPR work?

CRISPR, short for Clustered Regularly Interspaced Short Palindromic Repeats, is a genome editing technology that is cheaper, faster, more accurate, and more efficient than other existing genome editing methods [1]. The CRISPR-Cas9 system was initially adapted from the prokaryotic defense system, where CRISPRs are found in both archaea and bacteria [5]. CRISPR arrays serve as an integral part of the immune system by consisting of repeating sequences of genetic code which are interrupted by “spacer” sequences — residues of genetic code from previously attacking bacteriophages [1,5]. When the viruses attack again, the bacteria transcribe CRISPR RNAs (crRNAs) from the “spacer” regions in the CRISPR arrays to latch onto the viral DNA, where Cas9 —  an enzyme that recognizes the crRNA — will cut the DNA, causing the knockout to cease the progression of the attack [5].

In the lab, the CRISPR system works in a similar manner. Researchers can also utilize various other enzymes to cleave the unwanted DNA, one such being Cpf1. Where CRISPR-Cas9 would produce blunt ends — a complex where the DNA is cut at the same location on each strand — CRISPR-Cpf1 cuts DNA at different locations, thus creating short single-stranded overhangs [5]. These overhangs, otherwise called sticky ends, can help make the insertion of new DNA more stringent, accurate, and of the correct orientation. Various enzymes also recognize different areas on the DNA; this differentiation allows researchers to allocate enzymes to their area of study [5]. Once the DNA is cut, segments of interest can be inserted or deleted by using the cell’s mechanism of homology-directed repair (HDR) and non-homologous-end joining (NHEJ) [1, 6].

Scientists hope to expand their findings pertaining to CRISPR on a variety of issues, especially single-gene disorders such as hemophilia, cystic fibrosis, and sickle cell disease. In the long term, CRISPR also shows promise in preventing or treating cancer, heart disease, mental illness, and human immunodeficiency virus (HIV) infection [1]. However, these findings and advancements in application come with various ethical concerns. As of now, most changes introduced with genome editing are limited to somatic cells. This ensures that changes are restricted to few tissues and cannot be passed down from one generation to another; however, changes made to germline cells, or even to embryos, can be passed down to future generations. Since this area is still relatively new and unknown, there is not yet enough information about the accuracy and long-lasting impact. Off-target effects could prove disastrous as there would be an entirely new set of unforeseen consequences. Moreover, even at the right target, genes interact in a complicated matter; changes at one site could have implications in a completely different area. Multiple unknowns coupled with long term consequences led to a tremendous outcry after it was revealed that two twin girls were born after having changes made at their embryonic stage.

While He Jiankui has not published a paper describing the methodology and details on his experiment, he released a promotional video for his study on The He Lab YouTube channel on November 25, 2018. He describes how because “Mark” is HIV positive, he and his wife “Grace” were concerned that their children would potentially be positive as well [2]. This made them viable candidates for the experiment. He Jiankui mentions that along with fertilizing Grace’s egg with Mark’s sperm, the researchers also “sent a little bit of protein and instructions” that would do a “gene surgery” to remove the doorway in which HIV enters to “infect people” [2].  In the video, He claims that the team considered the surgery to be a success, as confirmed by genome sequencing [2]. Lastly, twin embryos were implanted via regular IVF “with one difference” [2].

This resulted in the first “CRISPR babies”: “Lulu” and “Nana.” He acknowledges that his actions will spark unparalleled controversy; however, he describes this path as no different than when in vitro fertilization (IVF) was first used to create Louise Joy Brown in 1977. According to the limited information published in Shenzhen HOME Women’s and Children’s Hospital ethics committee review application, mouse and monkey models were initially used to conduct “rigorous” early-test studies for the CCR5 gene since it serves as a receptor that the latches onto a white blood cell [3, 4, 7].

The next step was embryos of model organisms similar to humans were examined after going through CRISPR-Cas9 gene editing [3]. Genetically edited embryonic stem cells were isolated to determine if they abnormally propagated and whether they differentiated after genetic testing [3]. To address off-target effects, two methods were used. Firstly, using high-fidelity Cas9 enzymes, He was able increase stringency and reduce off target effects [3]. Secondly, the best single guide RNA (sgRNA) was selected for which consists of the crRNA fused to the scaffold tracrRNA sequence that Cas nuclease binds to [7]. Using these critical steps, the CCR5 region was able to be deleted.

According to the Associated Press, He altered the embryos of seven couples, with the birth of only Lulu and Nana so far [9, 10]. In every case, the father was infected with the disease, and the mother was HIV-negative. He’s goal was to introduce an uncommon, natural genetic variation that would make it difficult for HIV to infect white blood cells [8]. By deleting the receptor, the apparent intent was not to reduce the chance of transmission from the father, since the likelihood naturally decreases when the sperm is washed before insemination during IVF. Rather, He stated that he wanted to reduce the chance of infection later on in life [8]. While He claims that he is against gene editing for enhancement purposes and that it should only be used for therapy, many question whether his actions prove hypocritical [2].  Many assert that He’s actions suggest that being born HIV susceptible is a disease state; however, common sense tells indicates otherwise, and that the lengths that He went through to reduce HIV susceptibility are not medically justified [8, 9].

The limited information suggests that He’s editing was incomplete, and that one of the twins is mosaic [9]. This would mean that only some cells have the silenced CCR5 gene, thus indicating that there is a significant likelihood that she would not be protected from HIV [9, 10]. Even with a successful deletion all around, certain strains of HIV can still enter cells through CXCR4, a protein [9]. When geneticists first identified people with a natural genetic variation consisting of non-working copies of CCR5, it was thought that they would be resistant to HIV without any repercussions [9].  However, later studies showed that deficiency in CCR5 meant that people were more susceptible to infections like West Nile virus, Japanese encephalitis, and more likely to die from influenza [9, 11]. While CRISPR can help spearhead numerous medical advancements, there is no doubt that many unknowns remain. Unintended consequences that the twins and other potential children of this study could face would prove that the progression of CRISPR applications for humans, especially for embryos, is premature.