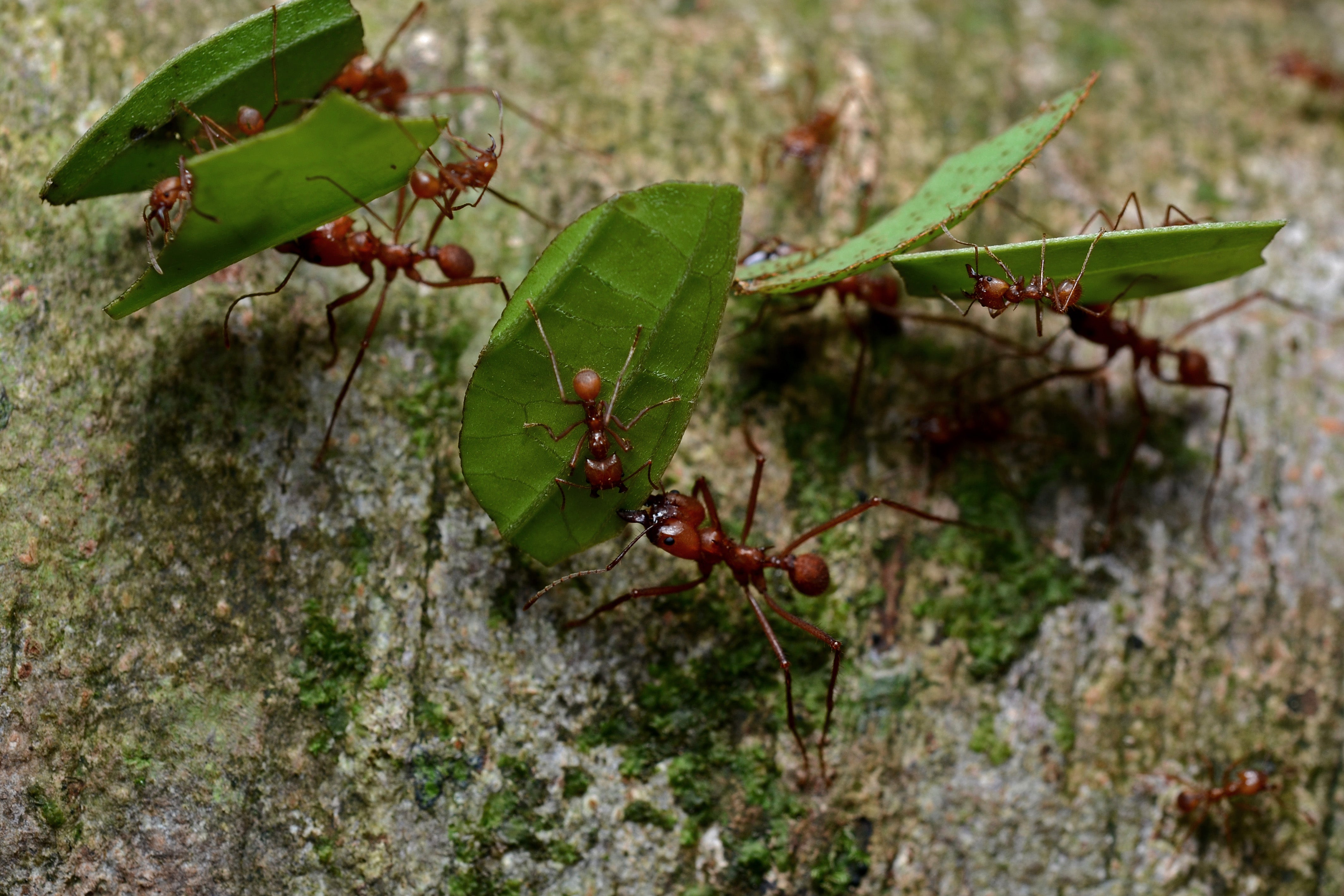 “I started to look into entomological research as a result of learning about insect diversity in ENT100. I came across a study regarding ants’ fascinating advanced ability to cultivate fungi. I thought it was incredible that we have agriculture in common with those tiny insects, and became interested in how ants are similar to and perhaps more advanced than humans in some ways.”

Human agriculture emerged from early domestication of plants and animals, and for centuries humans have managed and harvested those domesticates. Subsequent developments including crop rotation, controlled nitrogen fixation, and the creation of advanced farming tools have led to a highly technological and controlled cultivation system in many parts of the world. Yet human adaptability and ingenuity are not the only traits that can contribute to this kind of development; a tiny insect species was able to conduct complex agriculture long before our own arose.

Ants’ well-known practice of cultivating fungi in an agricultural manner is becoming a focal point of further research about how this complex practice derived from processes deeply-rooted in evolutionary history. These new insights indicate that ants’ agricultural similarities with humans evolved by dispersal into areas where fungi would need ants’ help in order to survive. As Ted Schultz, a leading entomologist explained, the ants provide vital resources for their cultivars, and “If things are getting a little too dry, the ants go out and get water and they add it…If they’re too wet, they do the opposite.”1

Ants that farm fungus have been found in the Americas in tropical forests, deserts, and grasslands. The 250 different species of these ants are part of the subtribe Attina of the tribe Attini within the subfamily Myrmicinae of the family Formicidae, which is the family of all ant species. An Attina queen’s daughter begins a new colony with its own fungal garden by taking part of the original fungi and moving away to a different location. Ant farming can be designated as either “lower” or “higher” depending on complexity of the system. The fungi of lower agriculture are able to escape out of the cultivation area and back into a wild state because they are facultative symbionts, meaning they do not necessarily need the relationship in order to survive. Higher farming prevents that escape because their fungi are obligate symbionts to the ants, so they require the relationship for survival.2 Therefore, the system of higher agriculture involves a greater degree of interdependency and specificity in the symbionts.

Biologists and entomologists associated with the Smithsonian Institute conducted a related study that was recently published. The researchers sought to examine the domestication of fungi cultivated by higher attine ants, and whether those higher ants domesticated fungi in South America or elsewhere.3 They acknowledged that biologists widely believe that ant agriculture began 55 – 65 million years ago in South American tropical rainforests, and that a subsequent fungal domestication event, which led to the more complex higher agriculture, also took place in that region. However, this study was the first phylogenetic investigation into whether domestication did in fact occur in those same environmental conditions.

The team of researchers used phylogenomic data from ultra-conserved element (UCE) loci to reconstruct the ants’ evolutionary history. The study’s methods included using various bioinformatics software to produce an alignment set that included 950 loci and 652,774 bp of sequence data, out of the ants’ genome size that can range from about 300 Mb to 630 Mb depending on the exact species.4 The researchers then performed phylogenetic analyses with three different approaches: maximum likelihood (ML), Bayesian inference (BI), and species tree (ST). The ML approach involved calculating the relative likelihoods of four different potential phylogenetic trees. In BI, they analyzed both parsimony starting trees and random starting trees. The ST approach allowed them to generate gene trees that excluded uninformative loci. The information garnered from these approaches allowed them to generate several different chronograms for the evolution of fungus-farming ants, and subsequent biogeographic models and trait reconstruction analyses.

This process led the researchers to results that support the well-established hypothesis that ants’ fungal farming began in South America’s rainforests. However, they also concluded that the transition from lower ant agriculture to higher ant agriculture, through fungal domestication, likely occurred in a dry or seasonally dry habitat (such as a savannah) about 30 million years ago. They reason that domestication requires some level of genetic isolation, so ants’ dispersal into drier regions may have allowed strains of their fungal symbionts to isolate from other fungal bodies that remained in wet areas. This isolation allowed coevolution to take place between the farmer ants and their symbionts, as the newly isolated fungi relied on their ant farmers to cultivate them in the dry environment. Thus ants’ dispersal to dry areas allowed certain fungi to grow in dry regions that they otherwise could not. The researchers indicated that the increased dominance of leaf-cutter ants, which cultivate domesticated fungi, is one result of this dispersal.

This study not only provides more information about ant’s agricultural evolution, but also illustrates the importance of testing even well-established and widely accepted hypotheses. The findings regarding domestication reveal the evolutionary mechanism of a significant mutualism that developed earlier than humans’ domestication of crops. Attine ants were performing agriculture long before humans, so perhaps further research into their evolution could provide expanded insight into early ecological processes.