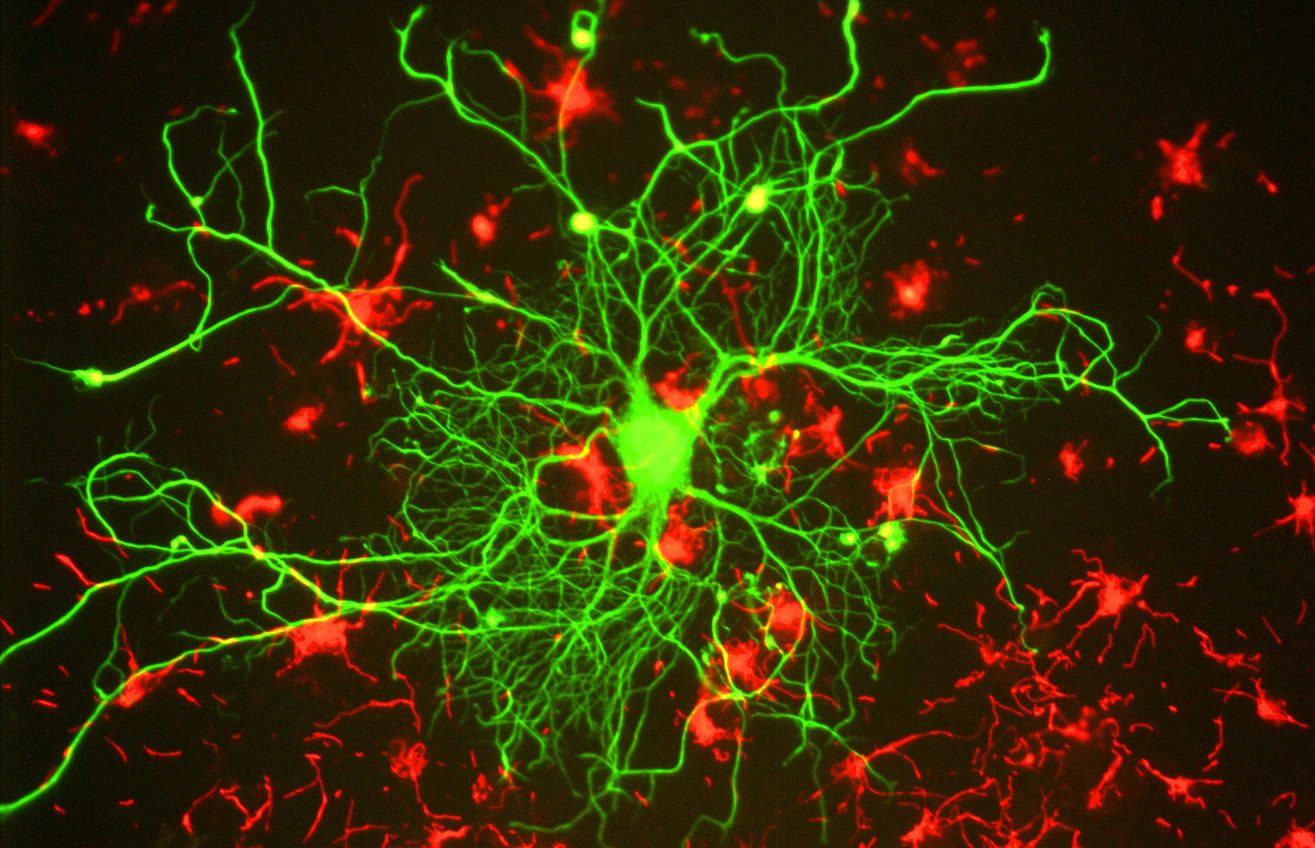 Author’s Note: While browsing recent findings in Neuroscience, I came across research investigating the possible conversion of glia to neurons. Although the conventional idea that neurons are irreplaceable has been overturned in multiple research studies, I was immediately intrigued by the possibility for neighboring glia to be the source of neural regeneration. The implications of this research could completely transform how treatment is approached in the neuroscience field of medicine.

The trademark of neural cells is their inability to regenerate, which makes each individual neuron subject to potentially irreversible damage. However, glia, cells that support and protect neurons, possess the ability to mitotically divide. Traditionally, glia were believed to play a secondary role to neurons, acting as supporting cells. This initial assumption is validated by the inability of glia to conduct synaptic interactions and electrical impulses like their neuronal partners (1). However, upon further investigation, it has been discovered that glia possess various qualities that render them equally, if not more, significant than neurons themselves.

A popular and widely accepted belief in neuroscience is the assumption that glia outnumber neurons in a nearly ten-to-one ratio. This notion was recently challenged in a study conducted by Barthheld et al. in 2016. They found that through the use of a new counting method, the isotropic fractionator, the glia-to-neuron ratio was closer to one-to-one (2).

The isotropic fractionator method departs from the traditional stereological technique of estimating cell numbers. Previously, cell counting was limited to well defined structures, excluding large neural regions of the brain that exhibit anisotropy – a tendency of some structures to exhibit different properties in different directions. This property is seen in aluminum, an anisotropic material where light reflects off the aluminum in different ways depending on the angle of light shone upon it. The isotropic fractionator transforms these highly anisotropic regions of the brain to isotropic, or homogeneous, suspensions of cell nuclei that can be easily counted (3). The use of this method led to the discovery of a one-to-one ratio of glia and neurons.

Glia in the peripheral nervous system (PNS), or Schwann cells, are known to regress to an earlier stage after an injury. This stimulates axonal regrowth via an upregulation of growth-related genes, resulting in remyelination – a feature unique to the PNS (4). Conversely, glia in the central nervous system (CNS), or astrocytes, suppress neural repair and form a “glial scar.” While the specific reasons for the differences in repair have yet to be elucidated, the primary intent of maintaining and protecting neurons remains the same.

Intrigued by the natural regenerative tendency of glial cells, a Penn State research team led by Dr. Gong Chen has been conducting research investigating the possibility of converting glia, specifically astrocytes,  that surround dead neurons into new neurons. This conversion is intended to be the best way to restore lost neural function.

This began with the use of the NeuroD1 protein, a neural transcription factor which, when inserted, could switch on neural genes in glia that were silenced during early brain development. The protein simultaneously switches off glial genes, turning the glial cell into a functional neuron (5). However, research has not investigated the fate of the remaining glia post-conversion, leaving some uncertainty about this novel method continually in revision. This method is unique because it has proven successful after neurons have died, shifting from the initial focus of saving dying neurons.

Previous research using the NeuroD1 protein has successfully converted glia to working neurons via a gene therapy method. Gene therapy works through the use of a vector that carries the favored gene. As viruses have evolved to be successful in penetrating the host genome, they are often used in gene therapy as the vector. The infectious part of a virus, however, is removed and causes no harm to the patient.

Despite the success of this method, the excessive cost of gene therapy treatment, sometimes reaching millions of dollars for a single patient, has isolated the large majority of those seeking affordable treatment for brain-related injuries. But a new method, pioneered by the same research team at Penn State that initially proposed the use of the NeuroD1 protein, has discovered an alternative method to expensive gene therapy, suggesting a drug therapy method instead. This drug therapy involves the chemical synthesis of four critical molecules discovered by Chen’s team and packages it into a single pill that can be orally ingested by the patient.

Research into a drug therapy alternative began with the discovery of nine small molecules. However, the intricacy of the specific sequence required to convert glia into neural cells stunted its transition to clinical treatment. The discovery by Chen’s team proposes a new method to expedite this process, necessitating the use of only four molecules. Jiu-Chao Yin, a biology graduate student on Chen’s research team, was responsible for the identification of these four molecules. He describes that the combination of these molecules modulate chemical signaling pathways, resulting in their ability to convert nearly 70 percent of astrocytes into functional neurons (5). These glial cells, initially unable to conduct electrical signaling, have shown the ability to transmit electrical signals to each other four months post-culture.

The discovery of this streamlined drug therapy could potentially be used to treat various neural-related medical conditions such as stroke, Alzheimer’s disease, and Parkinson’s disease (6). Chen et al. are currently working to resolve technical issues regarding drug delivery as well as investigating potential side effects of the drug. This new method shows promise in both efficiency and cost while possessing the potential for large distribution.

This discovery may revolutionize regenerative medicine as it further discredits the widely accepted belief that once damaged neurons are incapable of regenerating. The research done by Chen et al. suggests that the secret to neural repair could lie in glial cells, whose potential and many applications we are only just beginning to unveil.