A New Titan Among Bacteria

A New Titan Among Bacteria

Author’s Note: I have always been interested in “huge” single celled organisms, like the amoebas living at the bottom of the ocean or even slime molds. When I heard about a single bacteria cell reaching 2 centimeters, I almost couldn’t believe it. This article was originally written for my upper division writing course, to translate specialized knowledge for those who do not have the same experience with a topic that we might. I wrote about T. magnifica because I genuinely believe it to be a deeply interesting and amazing discovery, and I want to convey what makes this new species so interesting to people who don’t have a deep understanding of microbiology. I just had to know how it could grow that big. And now that I’ve learned more about it, I want to teach others that to reach this size, the cell has to break a lot of preconceptions we have about cellular limitations.

What are some of the largest living things you can think of? An elephant? A blue whale? What about the giant sequoias or towering redwoods? There are a lot of “biggest” organisms in the world, but would you ever expect a bacterium to claim that title? Just recently, a new king of giant bacteria was crowned.

Candidatus Thiomargarita magnifica, a bacteria whose cells can stretch up to an impressive two centimeters in length, was just discovered this February through joint research at Lawrence Berkeley National Laboratory and France’s Muséum National d’Histoire Naturelle [1].

“Only two centimeters? That’s as big as a penny!” You may think to yourself. And you’d be right, but this defies all expectations about how big bacteria can grow. Take a more common bacteria like E. coli, for example. They are the “gold standard” for many scientists, especially for bacterial size and morphology. A single cell averages only one micrometer in length (one thousand micrometers fit in a millimeter). By comparison, T. magnifica looks massive, reaching sizes over 20,000 times larger with just a single cell. If E. coli were as big as the average person, T. magnifica would tower over us at 100,000 feet (19 miles) tall, which is high enough to reach supersonic plane altitudes in the stratosphere. But if most bacteria are microscopic, what advantage is there to growing so massive? Relative to a human-sized E. coli cell, a single Thiomargarita magnifica cell would be over twice as tall as Mount Everest.

Their massive size is a survival strategy for life in the outside environment. Bacteria like E. coli and Salmonella, are small because they are pathogens. When you mostly live inside another organism, staying small means you can reproduce faster, spread easier, avoid capture, and gather all the rich nutrients in your host. Yet outside our bodies live entire microbial ecosystems with members that have to depend on themselves rather than a gracious host for everything, like T. magnifica.

The Thiomargarita genus, who despite the name have nothing to do with margaritas, are part of a larger group called “sulfur bacteria” that “eat” sulfur to get their energy. These bacteria like to live in the mud of streams, ponds, and estuaries where sulfur levels are high and oxygen levels are just right for survival. Unlike other more active bacteria, Thiomargarita do not move around very much. Once they stick somewhere, they live their entire lives on that spot. By growing bigger, they can better handle any potential changes that affect the concentrations of their energy source without needing to relocate from a good spot [2]. This is a sound strategy used by many members of Thiomargarita, including the former size champion Thiomargarita namibiensis which only grows to 750 micrometers in diameter.

But what does T. magnifica do differently to grow so big? Think of a simple bacterial cell like a balloon filled with water, glitter, and a piece of string. The rubber of the balloon is the membrane, the water is the cytoplasm that fills the cell, the glitter floating around inside is the different materials the cell needs to stay alive, and the string is the DNA, the blueprint of the cell. For our balloon cell to stay alive, it needs to move its parts around fast enough to fix damage, take in food, and excrete waste. When the balloon is small those parts can move around easily enough on their own; just by random chance, the pieces of glitter will get where they need to be, and our stringy DNA is more than enough to call all the shots.

As the balloon gets bigger, it takes longer for everything to cross the distance, and the DNA can’t make it to where it is needed. The surface area of our balloon has increased, but the volume inside grows even faster. This is the major problem with diffusion, which many bacteria rely on for their survival [3]. At microscopic sizes it takes less than a second for a molecule to diffuse its way through the cytoplasm. However, it takes oxygen over an hour to diffuse across even a millimeter [4]. And larger, heavier molecules, like life-sustaining sugars, move even slower. Growing too big means there’s too much space to cover, and diffusion alone cannot meet the bacterial cell’s needs to survive.

But diffusion is all that bacteria really have. Bacteria belong to a group called the prokaryotes, whose cells appear relatively simple when compared to our own. The very definition of a prokaryote is a lack of membrane-bound organelles (tiny organs within the cell). This is why most bacteria stick to such small sizes; they physically can’t afford to grow too big without starving themselves.

Yet, some bacteria, like T. magnifica, are determined to prove both physics and biology wrong. Along with other members of the genus, T. magnifica fills most of its body with a large vacuole in order to effectively decrease the volume that needs diffusion. It’s like filling the water balloon with another large balloon, so that everything is pressed into the thin layer between. The cytoplasm is actually only around 3 micrometers thick the whole way around the cell, with the vacuole taking up 73% of its total volume [1]. So even though the cell may be very large, a lot of the important processes take place in the very periphery of the outer membrane in that very thin layer.

That thin layer may hold all the cellular machinery, but it wouldn’t make sense to waste all that extra space, either. So the vacuole also doubles as a storehouse for the various chemicals that the bacteria might need to keep away from their proteins or are simply harder to come across. Important compounds like nitrates can be stored inside and kept at concentrations much higher than the surrounding environment whilst protecting other parts of the cell from harmful side reactions [2]. Recent investigations even indicate that they could use this extra membrane as a way to produce energy, much like how our own cells use mitochondrial membranes to produce most of our energy. This multipurpose structure is one of the reasons why T. magnifica has been able to reach such staggering lengths. It also proves that bacteria are more than the simple balloons of chemicals that we might make them out to be.

Another difficulty with large cell size relates to the cell’s DNA. With smaller cells, it’s easy enough to read off of a single copy for every protein it needs. But in a bigger cell, even with a thin cytoplasm, proteins would take too long to reach their destinations. And this is where T. magnifica really stands out from the rest. Where most bacteria have one copy of their DNA, T. magnifica has many, a situation known as polyploidy.

Polyploidy itself is hardly new. Even we have two copies of each of our 23 chromosomes, and some plants can have dozens of them. The other Thiomargaritas also have multiple copies of their chromosome spread around the cell, but T. magnifica stands out for having over 737,000 copies in a fully grown cell [1]. With one of the highest known numbers of DNA copies, T. magnifica can spread them throughout the body and maintain its impressive size.

Having the most DNA copies is not enough, however. One more unusual trait about T. magnifica is how it stores its DNA. Bacteria usually let their chromosome float around in the cytoplasm, accessed whenever it’s needed. But this giant actually keeps its DNA stored within specialized compartments that its discoverers have adorably named a “Pepin” in analogy with the pips (small seeds) in a watermelon [1]. And the analogy isn’t too far off. 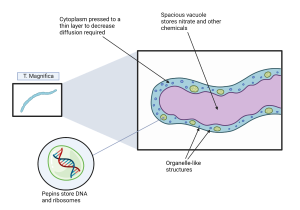 A closeup of T. magnifica’s insides. See how the cytoplasm is only a small part of the volume of the cell, with pepins scattered throughout to organize the DNA and protein factories.

These little pepins keep the DNA more compact and organized, preventing messy diffusion throughout the whole of the cell body. They even discovered that ribosomes, the cellular machinery that turns genetic code into proteins, are also housed within these little organelles. Some eukaryotes have multiple nuclei in their cells, but in bacteria, such a compartment is almost unheard of. The defining characteristic of prokaryotes is the very lack of a nucleus, a membrane compartment where DNA is stored, so what about these pepins? While not exactly the same in structure, it raises questions about just how complex bacteria can be, and where our own nuclei came from.

It is clear that without specialization, it is impossible for a single cell to grow so large. Our own cells, and the cells of every animal, plant, and fungus, house DNA within a nucleus. These pepins within T. magnifica play a similar role in holding DNA all around the cell’s body, which no other bacteria are known to do. It even uses a vacuole to lower its volume and potentially store nutrients like an organelle. If prokaryotes are not supposed to have such structures, then what does that mean for bacteria like T. magnifica? Do all prokaryotes have to be simple?

The more we learn from T. magnifica the more it defies our conventional definition of prokaryotic life. Further study of this amazing oddity could shed light on where eukaryotes like us came from, what the real limits of a cell’s size are, and if bacteria are as simple as we think. Or maybe this is just the tip of the giant bacteria iceberg. Maybe an even larger giant is still waiting to be found, ready to defy our expectations all over again.